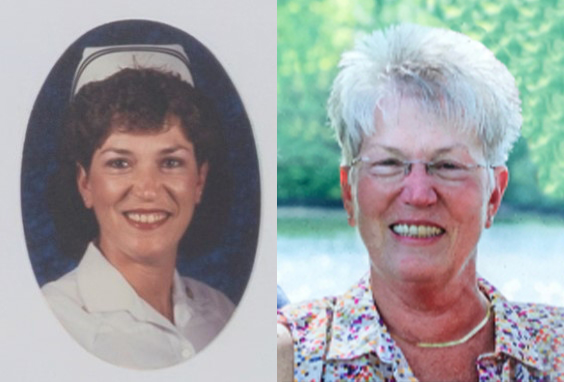 WHY DID SHE BECOME A NURSE?

Brenda from a very early age had a passion and desire to care for others. Starting with her dolls as a small child, Brenda had always known she would become a nurse.

WHY DID SHE CHOOSE ST. ELIZABETH SCHOOL OF NURSING?

As a 29-year-old single mother of three small children living in Lafayette, Brenda knew that if she wanted to begin her journey to become a nurse that she would need to stay local. St. Elizabeth School of Nursing was that local educational option to achieve her dream.

WHAT WAS HER FIRST JOB IN THE FIELD AFTER COMPLETING HER DEGREE?

Brenda began her nursing career in the Emergency Department at Home Hospital, Lafayette, IN.

WHAT WAS HER MOST CURRENT POSITION OR OTHER NOTABLE POSITIONS / MISSION WORK?

Brenda had a 29-year long career at the Roudebush VA Medical Center in Indianapolis, IN, and in her last role there, she served as a charge nurse in the operating room. In addition to the VA and early in her nursing career, she was employed as a home health nurse and had enlisted in the Indiana Army Reserves where she served on a medical unit and earned the rank of lieutenant. Also, during her career, Brenda went on several mission trips to Haiti where she assisted in various surgical procedures.

WHAT DID SHE THINK WAS THE TOUGHEST PART ABOUT BEING A NURSE?

Having served veteran patients most of her career, the toughest part about being a nurse for Brenda was witnessing patient frustration due to the limited resources available to veterans and their families.

WHAT DID SHE ENJOY WHEN NOT AT WORK?

Brenda’s number one priority and the thing she loved the most was her family. So, when she was not at work, she enjoyed vacationing and spending time with those she loved the most. Brenda also loved the outdoors and enjoyed everything from hiking and bicycling to whitewater rafting and boating and everything in between, as long as it was in the sunshine.

*After a long battle with cancer, Brenda Murray passed away on May 30, 2019. To honor her memory, her family established the “Brenda E. Murray Memorial Scholarship” creating a lasting opportunity for future St. Elizabeth School of Nursing students and a legacy for Brenda’s devotion to others. VITA ALIIS VOTA